I’m going to be that crazy old lady picking up garbage off the street. 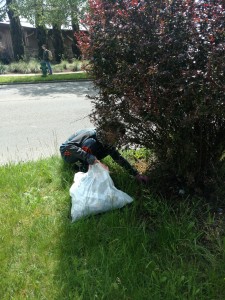 Garbage walk with the kid

Middle school these days requires five volunteer hours per year to graduate – which doesn’t sound voluntary but whatever.  My 7th-grade son decided to fulfill the requirement by picking up garbage in the neighborhood.
This was bliss for me. I get to go on a dog walk with my kid. He has to come with me. I point out garbage and he has to pick it up. It doesn’t get much better than that.
I was thinking we’d be going on long walks to fill those five hours. But holy cow, the streets are full of garbage once you start looking. It’s everywhere.
During that first walk, my son picked up 4.3 pounds of garbage; the second walk was 3.5 pounds; third walk was 4.7 pounds; fourth walk was 6 pounds. Lots of water bottles, cigarette butts, fast food containers, soda cans, beer bottles, and cigarillo wrappers. Some guy tried to give my son $5 — said he’d never seen a kid picking up garbage. 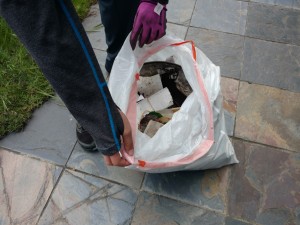 Pounds of garbage from our tidy neighborhood street.

Now I see garbage everywhere. And I can’t just leave it there. I have to pick up garbage on dog walks and walks to the bus stop. And, oddly, it feels good to pick it up, to not just leave it lying there for someone else to deal with.
Surprisingly satisfying. Like, happy.
I’m already that crazy old lady, just 30 years early.