We had a flock of five happy chickens until a raccoon came for a visit one evening. I arrived just in time to see my favorite brown hen, a smart, spry girl, disappear over the back fence in a raccoon’s mouth. I guess she wasn’t smart or spry enough. 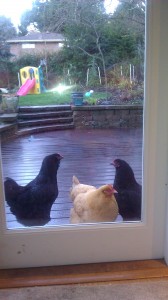 They really want to be indoor chickens

We lost two more chickens over the course of that bloody weekend. The raccoon enjoyed the intellectual puzzle of the coop latch and helped himself to chicken dinner as his reward.

I went out late one night and scared off the raccoon, watching him silently slither over the fence like an ink stain. He was chewing apart the chicken wire to get inside; the broken strands were bloody where he was gnawing.

I considered spending the night in the coop.

After the massacre, Queenie, the older matron at the top of the pecking order, called and called for her flock to come roost. She wandered confused around the backyard, calling for her lost flock, a picture of chicken heartbreak.

Unfortunately, I found one of them — or what was left, its talons clenched white and bloodless — while I was hammering in hardware cloth behind the coop. I screamed like a little girl and made my partner deal with it. I did not appreciate his jokes about chicken soup.

Our chicken run is now a fortress of hardware cloth and raccoon-proof padlocks and we take in refugees from other raccoon-ravaged flocks. 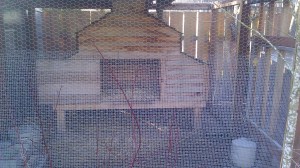 Like Snoopy, the chicken at the beginning of this story. She is the last of her raccoon-decimated flock. She badly wants to be top bird in mine.

Much is written about introducing new flocks to each other, none of which Snoopy’s owner nor I bothered with. Snoopy was lonely; I had a safe coop and chicken friends for her; they could figure it out. Which they did, after one spectacular chicken fight.

Now the three hens march companionably around the backyard together, pooping in my garden, raccoons long forgotten. Queenie is in charge on paper, Snoopy is the top hen but gives Queenie the respect she deserves as the matriarch, and poor Pigeon, the fluffy and particularly dim-witted hen, remains at the bottom of the pecking order. 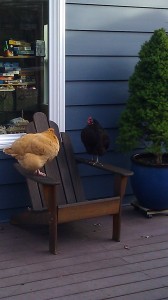 Roosting on my meditation chair

This afternoon, I stood in the rain enjoying their chicken-ness while I waited for them to hop into their coop for the night. Queenie and Pigeon perched on the chicken feeder enjoying a last snack before bed. The chicken feeder is an ingenious, rat-safe contraption that opens when a chicken (but not a rat!) stands on it.

Queenie and Pigeon are good at the chicken feeder. 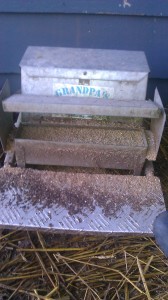 But the concept still eludes Snoopy. Every time she came over for a snack, her head stretched inquisitively between Queenie and Pigeon, they stepped off the feeder out of her way and the threat of her pecks.

And the door slammed on her head.

I watched this over and over as I stood there in the rain. Until everybody got tired and went home to roost, and Snoopy went to bed hungry.