An old friend asked me what I thought of Brene Brown’s book Daring Greatly. I stumbled, trying to be insightful, and then gave my copy to someone who needed it. 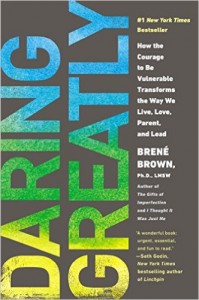 This is what I should have said.
Her book has given me a new vocabulary.  It has given me a linguistic shortcut that describes what is happening when I dare to be open to being hurt, to being laughed out. To being vulnerable.
I discovered this in the middle of an awful story.
Recently, my 9-year-old daughter was viciously sexually harassed on the school bus by two male classmates. Whom she thought were her friends. If that had happened to you or me, we would be talking to the police.
We didn’t hear from the boys’ parents.
So my husband and I reached out to them, inviting each set of parents to bring their son to our home to apologize to our family. I didn’t want those boys to grow up thinking that girls sitting alone on the bus don’t matter, that they are victims of no consequence. How lucky for those boys to learn that in the safety of fourth grade, before police officers, lawyers, and courtrooms are involved.
I wrote, “This invitation comes from a place of generosity from our family to yours — this meeting won’t be fun for any of us, but could be a teachable moment that [he] remembers forever.”
I never heard from the mothers.
Both fathers – both leaders at Seattle companies – wrote defensive replies. They made it clear they had no interest in our girl, our family, or our invitation.
And I realized, as I mulled it over, that I had dared to be vulnerable.  I had reached across the conflict and spitting outrage with an invitation to connect – as parents, as families, as community. Rather than feeling rejected and shamed, I feel brave. (Well, mostly.)
In Brene Brown’s vocabulary, I dared greatly.