A friend teased me, saying dismissively, “You think going for a run is the answer to everything.” 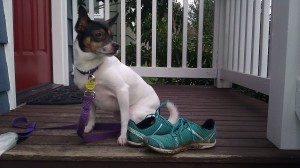 Antidote to the blues

It’s bugged me ever since, because, well, it’s true.

Yesterday I woke up blue. Maybe it was the weather, maybe I was fighting a bug, but I woke up despondent. I had a headache. I wanted to curl up on the couch and watch TV and eat cake.

The last thing I wanted to do was go for a run.

It’s like a magic fucking pill. I felt so much better afterwards — more energy, positive, resilient.

All I had to do was put on those shoes and go.

Years ago, I tore a quote out of a Title Nine catalog and have kept it taped to my computer monitor. It bugs me that a piece of marketing is so inspiring, but whatever: 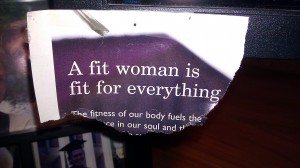 Probably applies to men, too

A fit woman is fit for everything.

I want to be fit for everything. So I run.

The thing is, I don’t really like to run. Occasionally, it’s awesome — like running in the woods with Megan — but most of the time I’m thinking about being done. I just like how I feel afterwards.

I was talking with a friend who actually does like to run. We were sitting in the grim, gray cubicles of Amazon years ago, and he said, “Going for a run is always the right decision.”