I signed up for the Seattle to Portland Bicycle Classic. And I don’t have a bicycle.
Which poses a problem.
This idea started last summer when I helped a friend with her fear of driving. I thought about what I’m afraid of.
What fears keep me small?
With some embarrassment, I’ll admit I’m afraid of balloons. Their potential for a loud, startling bang makes me cringe. Makes me crazy.
This fear keeps me small because bike inner tubes are, well, balloons. A flat tire is pretty game-ending. A whole sport is out of my reach because of a silly fear of balloons, and every year I watch the STP ride past my house without me.
This friend of mine faced her fear and inspired me (damn her!). I took a How to Change Your Tire class. And discovered that I am a mechanical savant. I am spectacular at changing a bike tire. Who knew!
Which means I can go on long rides. I can even do the STP and wave as I pedal past my house on a 200-mile ride.
I just need a bike.


Saturday, February 2
A friend has lent me her beautiful, light blue bicycle. I can lift it with one hand. I’m afraid of breaking it. I have no idea how the gears work. My friend’s husband told me “the geometry of the bike is different” from the sturdy commuter bikes I’m used to. Yeah, I’ll say. 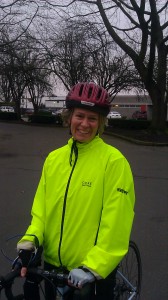 I signed up for a Cascade Free Daily Ride called Lico’s Grumpy Beginners Bike Ride. Lico is really his name, and he is one of those very kind, very enthusiastic crazy bicycle people. He taught me which gears to use (the back ones, not the front usually — who knew?!) and how to shift them.
I learned that biking is WAY more fun than running.
Daily stats
15.22 miles
Average speed 10.65 mph
Fastest mile 3:30

Sunday, February 3
I passed another biker today. This is such a rare event it is worth noting here. Of course, the bike I passed was a collapsible, recumbent tandem and the rider in the back was a small child, but I kicked their ass, which is the important thing.
I’ve been thinking about the expression “God protects fools and small children.” I think she might have an eye out for rookie bicyclists, as well. Or maybe we just fall under the fool category.
I was cutting though the Museum of Science and Industry or whatever it is parking lot where I always get trapped in the maze of curbs and have to get off my bike to lift it back onto the path. Two bicyclists were just passing me, so I decided to follow them, figuring since they were in such cute biking outfits they would know their way through. They split up, and I had to choose a biker to follow. I chose the wrong one, or maybe the right one, considering what happens next.
The biker I followed was as confused as I was by the curb maze. As I was lifting my bike up and over, I noticed that the clip thing that holds the front wheel on the frame of my bicycle was loose and flapping around. If I had followed the other biker, who was cruising past me on the path, I wouldn’t have stopped to lift my bike over the curb and wouldn’t have noticed that I was one small bump away from losing my front wheel.
Someone’s keeping an eye on me.
Daily stats
12.97 miles
Average speed 11.64 mph
Fastest mile 3:58

Saturday, February 9
And just like that, I’m part of a big group of riders. Me, in a peloton. Which really just means a lot of standing around waiting for everybody to get ready. Longest ride yet: just shy of 20 miles. I’m comfortable to about 15 miles and then the seat starts bugging me, and my left elbow hurts, and my back hurts. 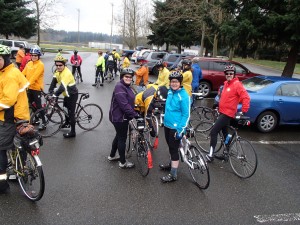 Proof that I was there: red helmet, yellow jacket, turning to the camera